All My Loving: Parallel Motion in the Beatles 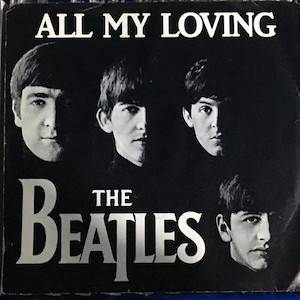 If I’ve told you once, I’ve told you a thousand times: a melody that follows the bass line is no melody at all. It’s a mark of a songwriter who can’t hear musically - they hear the chords, the bass plays the root of each chord, and they just sing what the bass is already playing. They haven’t written a tune. They’ve just copied the bass! So imagine my surprise when I realized that one of my favorite songs by two of the greatest songwriters of all time featured just such a melody.

Generally, I feel tunefulness is created when a melody soars free from the chords and bass line. A tune that slavishly follows the chords is just less melodic. Why? A similar principle dates to the prehistory of classical music. As far back as the 14th century, composers were told to avoid what are called parallel fifths and parallel octaves. If any two melodic lines (even a bass line) reach a point where they’re either same pitch or are separated by a fifth or an octave, they’d better not still be at that interval when they change notes. For hundreds of years, composers went to extraordinary lengths to avoid breaking this rule. It’s so strict that theorists love to search for examples where great composers have broken it so they can try to explain why.

I do believe that pop music is inherently different from classical music. But don’t great songwriters avoid melodies that just copy the bass? Especially one of the finest and most successful songwriters of the rock era – Paul McCartney? And especially one of the most perfect of the many nearly perfect early Lennon-McCartney songs - All My Loving?

“All My Loving” is full of parallel motion

Here’s the song on youtube. This table shows the melody and chords for the first four bars of the song:

The first note in each measure is simply the root of the chord. F# for F#m, B for B, E for E, and C# for C#m - a recipe for a terrible tune. And the next four bars aren’t much better:

The first note in each measure is no longer the same as the root of the corresponding chord, but the two do still descend in precisely parallel motion: C# for A, A for F#, and F# for D. Putting it all together, for the first eight measures, the tune movesalmost completely in parallel with the chord roots.

The next five measures of the song repeat the first five. These are followed by three bars that break the pattern to cadence on the words “send all my loving to you.” And that’s the entire sixteen-bar verse (or, arguably an A-section, if you consider this not to be a verse-chorus song, but an AABA song). Which then repeats.

Why this tune is still great

1. Here’s a four-bar tune that simply copies “All My Loving”’s chord roots. The chord progression provides a gentle lilt and rhythm, with a cadence in the third bar, followed by a graceful, gently surprising move to the relative minor in the fourth which keeps the energy moving. Still, you wouldn’t have millions of teenagers screaming for this one.

2. Here’s that same tune with one change - in the third bar, like John and Paul, we go to a high E, not a low E. This introduces one of the wonderful features of “All My Loving” - its slow build to a climax on the E in the third bar, followed by its gradual descent. The F#m-B-E chords express a classic ii-V-I cadence, and now the tune resolves with that cadence. I’m still not hearing the teenagers scream, but the high E gives the tune a clear direction, a shape.

3. Now let’s introduce what theorists call “passing tones” -notes that fill the gaps between the consonant notes that begin each measure. So, for example, while before our tune began with F# F# F# B, it will now start with F# G# A B. Does the rhythm we use matter? Let’s explore that by changing the rhythm of each bar, from half quarter quarter to quarter quarter half.

Somehow, simply reversing the rhythm makes the tune anti-melodic, perversely and obviously so. Why? Whereas Paul McCartney’s version is full of pregnant, suspenseful pauses, this version seems to stop and start, lurching awkwardly. In Paul’s song, each bar begins with a stable note, then a pause, and then a push on through passing tones to a resolution on the first beat of the next bar. The tune seems to keep flowing past these little pauses.

4. So let’s return the rhythm to half quarter quarter:

5. To my ear, the original tune is suddenly recognizable. And now, we can make it even better by adding a bit of syncopation, lending more momentum and some sorely needed unpredictability. We’ll also stick in two pickup notes, and we’ll throw in some lyrics to boot. Note how the extra syllable in the second bar (“miss you”) makes the first phrase end not on the consonant B, but the dissonant C#, adding an equally important harmonic syncopation:

And look - we’ve built the first four bars of “All My Loving”! Now I can hear those teenagers screaming, although, as I sang these particular examples, they’re probably screaming in horror.

So what have we learned here? How does the song sound so melodic despite the parallel motion? I’ve got a few reasons that build on what we demonstrated above:

Although the melody hits the chord root on the first beat of each of the first four measures, it always progresses in stepwise motion The melody has a clear shape, tracing a quick arc up from a low F# in bar 1 to a high E in bar 3, then descending gracefully back down to F# by bar 7. Two bars to ascend, five to descend - the asymmetry adds interest. Take away the chords, and you’ve still got a really pleasing tune. That rapid melodic ascent causes tension; the descent slowly releases it. And the fact that the tune doesn’t quite cover an octave creates an interesting structural dissonance. (It does dip down to a low E in bar 6, right before it gets to F#, but it’s only a brief dip on a dissonant note.) The syncopation and overall rhythm are incredibly balanced, though I’m not sure I can’t quite tell you why. It feels melodic!

But, like Vanessa Williams, I saved the best for last. Throughout this discussion, I’ve been talking about chord roots, not about the actual bass line. And what really matters is how the melody moves against the bass. When I first puzzled over this song and its parallel motion, some years ago, I was too focused on tunes and chords to listen to details like the bass. Then, during a visit to the University of Minnesota, where I was thinking of applying to grad school, I discovered an amazing book - the Beatles Complete Scores, a set of note-for-note transcriptions of every Beatles song. And this is when I started noticing that songs had bass lines.

6. Here’s the song with Paul McCartney’s bass line. The bottom line of this table shows not chords, but bass notes.

This walking bass line ingeniously moves in constant contrary motion to the tune! In bars 1 and 2, the tune goes up and the bass goes down. In bars 3 and 4, the tune goes down and the bass goes up. I can’t think of any other Beatles tune in which Paul played this sort of walking bass line. To my ear, this is what drives a great song over the top into sheer, utter pop perfection.

For me, discovering this bass line was a revelation. But our story is still not complete. While writing this article, other Beatles songs came to my mind, and to, my shock, I realized that numerous others were clearly built on parallel octaves and parallel fifths. Many of their tunes consist of short phrases that simply fill the space between chord roots. “I Want to Hold Your Hand” often follows the chord roots in fifths. “From Me to You” begins with one of my favorite melodies of all time, and it, too, follows the chord roots, from C to A. And you can find this parallel motion in mid-period and later Beatles tunes too, from “Yesterday” to “Yellow Submarine”.

Does this explode the entire notion that tunes should fly free of the chords? Avoiding parallel motion is so crucial to classical music, but in pop music, does it simply not matter?

I think it still does. Remember the unlikeable tune we began with above? Tunes that simply follow the bass line continue to disappoint and underwhelm millions of polite listeners every day. And yet, fifths and octaves are the most powerful intervals we have. Could a highly skilled songwriter hit these intervals throughout a songwithout making it obvious that the tune just followed the chords?

Apparently John and Paul could. This topic deserves an article of its own! Their melodic ingenuity and the explosive rhythmic energy created by their short syncopated phrases serve to hide the parallel motion. The result is a combination of melodic grace and intervallic strength that’s vastly appealing. I’d even say that the power of fifths and octaves coupled with an unmatched melodic sense results in a combination of clarity and beauty that simply screams “The Beatles”. It’s just their style. And they were good enough to pull it off.

Should you try this at home? I don’t know. I still think parallelism is dangerous for anyone who doesn’t happen to be in one of the greatest songwriting teams of all time. But what good is music analysis if it doesn’t give you new ways to write? Who knows? Maybe you’ll pull off this balancing act. Others have! Just listen to Peter, Bjorn, and John in Young Folks.